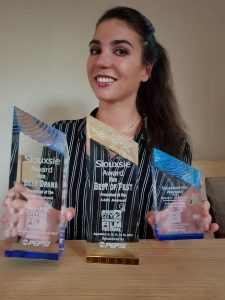 On the 16th of September the „Sioux City International Film Festival 2018“ ended with its Award Ceremony! „Sea at Night“ was able to win in three categories! We not only received the Award for the best film in our category „Drama“, we also won the audience prize (also in the category „Drama“). Additionally, we won the main prize of the festival (the grand prize of the jury, „Best of Fest“)!

Our US-premier couldn`t be any better!

We feel honored for the appreciation and want to thank the festival, the jury and the audience!

„When is the flight to Canada?“